Martin and I travelled to Venice on the 2. of october to spend one day in the city before taking the train to Lignano Sabbiadoro, the site of a somehow special competition. The Europe Evolution Cup was going to host both an AIDA and a CMAS competition alongside each other, for the first time in history. It didn't mean much of a difference to the competition itself. AIDA and CMAS competitors were to compete at seperate times with different judges and rules, but it ment that the two families of freedivers would get to know each other a little better. One problem though, most of the CMAS freedivers were italian and therefore only spoke italian. 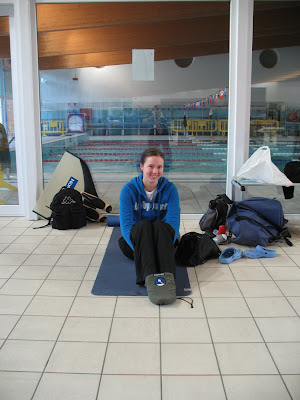 The whole competition was ment to attract alot of the great names and stars of our sport, but this might have scared alot of the average freediver away. This was a real pitty as the AIDA competition only counted 12-13 names. It was still a well organized competition, a nice pool and some good results (two WR!).

I was happy to do a 5min 4sek dive in static, because the contractions came early (2min) and I had to do a little fighting to get there. Things didn't go so well in dynamic unfortunatly, even though this diciplin had been my biggest focus. The count down got messed up. The 2 min mark came at the wrong time, no 1'30, no 20sek. I kicked off with a bad feeling and alot of nerves, which made me come up already at 75m.

The judges (Pim and Bill) gave me a restart, along with Barbara, but it was just not my day. I came up after doing my announced performance at 110m.

It was very inspiring to watch Natalja Molchanova swim 214m (WR), and then her son, Alexey, doing his first world record with 250m. I got to chat with her during the doping test and got a few "secrect" training exercises. I'll have to try it out and see where it takes me...
Posted by Elisabeth Müller at 21:29