Teaching and training in Berlin 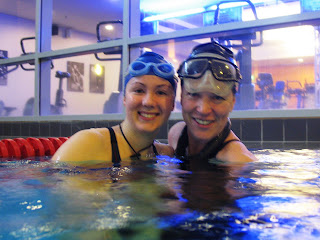 Anna von Boetticher, my good friend and fellow freediver, has set out to break all the german pool records. She and Martin (her full time coach for the attempt) has got started on a quite ambitious training program to get her in shape for the first weekend of May. The record attempt will take place in the pool of Elixia, which is sponsoring the event with free training for Anna and her coach. 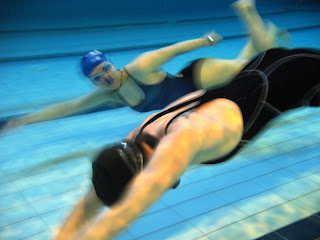 As I travelled to Berlin on Wednesday 25th, I was hired as an extra monofin teacher for the long weekend to help Anna improve her technique in DYN. The biggest issue for Anna is to learn to swim with her whole body, not just kicking with the legs. We took videos both at the start and end of the trainings, and there's already a great improvement! 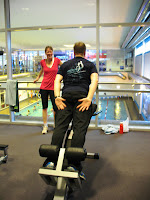 We went training practically every day, doing basic monofinning exercises, sprints and trying different monofins. We also did training for the other disciplins, STA and DNF, and fitness training at the gym. On Sunday we finished off with a 70 min cycle class, and of course with a little apnea in between. It was hard work, but a lot of fun! If Anna keeps her progress and Martin keeps pushing her, I'm very confindent she's gonna make it. 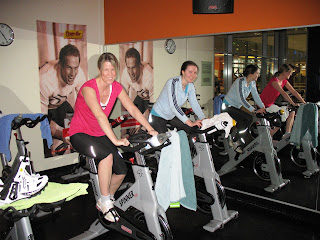 Posted by Elisabeth Müller at 23:30 No comments: 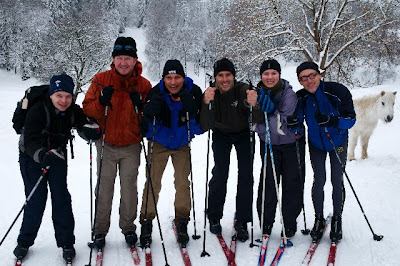 On Monday after the Oslo Ice Challenge, we were a group of freedivers who wanted a little more or the Norway experience. The great snow fall had left exellent conditions for cross country skiing, which is the national sport of Norway. Being a native, I was given the task of organizing and showing the way (with more or less success).

It turned out that the French (Guillaume and Christian) were completely superior on the tracks, while the Danish, British, German and Norwegian were content with a little slower pace. Everybody in the group seemed to have a great time and enjoying the nature, the work out and the rewarding chocolate. See you next time!
Posted by Elisabeth Müller at 13:58 1 comment:

I must confess I had my doubts on weather or not I would be able to cope with the freezing water temperatures under the ice in Oslo. Most of my deep diving have been done in Egypt or Sweden in the summer, and the coldest I had previously tried was 7-8 degrees. This was on a short dip in Mjøsa, Norway's biggest lake, in May 2006.

But to look on the bright side, this would be a proof that I'm not so much of a chicken as I sometimes seem ;) And it would be an experience to tell the grandchildren about some day... 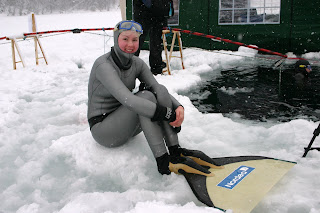 Luckily, I had just got sponsored a brand new suit from Elios sub. It is a 5mm Freedown suit with open cell inside. I also used a 2mm vest and shorts underneath, and stayed practically dry!

The only place where I really could feel the cold, was on my face, hands and feet (the feet was okey after I put on a pair of socks with the tip cut off, partly over the monofin footpockets). It also helped alot to have some hot chocolate to keep warm :)

The cold water poses other challenges than simply keeping warm. Equalizing becomes much more difficult I realized. On the last dive of the competition on Sunday, I was focusing too much on getting down and the fact that it's really getting dark. I simply forgot to fill my mouth with air for the deeper equalization, called a mouthfill. On 35m I didn't have any air left, and even though I could see the light and the bottom plate clearly on 40m, I had to turn around. It was a new lesson learned about cold water diving!

I really felt that I moved some bounderies in Oslo Ice Challenge. 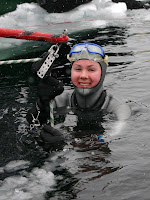 I now know that cold water, no warm-ups, darkness and bad weather can not stop me from freediving. On my second dive, I was feeling the urge to turn around so many times. All the different excuses were passing through my mind, but I kept going down. Touching the bottom plate and starting swimming back up, I felt a great sensation of success. Seeing the light coming through the ice and the dark hole where I was returning to, is something I'll remember for a long time.
Posted by Elisabeth Müller at 21:48 4 comments:

Here's a look at the set up


And here's Thomas Grindevoll coming up from his 52m CWT dive

Posted by Elisabeth Müller at 00:30 No comments:

Oslo Ice Challenge was indeed what its name implies, a challenge. The water was around 0 degrees on the surface and the ice was more than 30 cm thick. The weather conditions were far from optimal though, with wind and snow. The air temperature was 2-3 degrees, giving some problems with water on the ice. 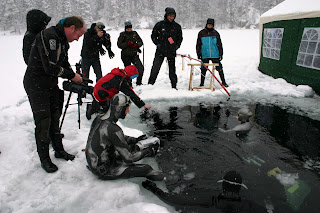 Despite all this, the world’s first freediving competition under ice was a great success with good dives and happy contestants. The competition ran smoothly thanks to a job well done by the organizers, judges, helpers and the athletes who volunteered to help out with safety diving.

The results were quite impressing, taking the conditions into account, with strong dives and safe dives. The athletes were diving twice on Saturday and once on Sunday in whatever discipline they choose, with CNF giving 1,35 points and CWT and FIM giving 1 point each. The maximum depth was set to 52m, which made the top four athletes chase depth in CNF to gain the most points.

The winner was current world record holder in CWT, Guillaume Néry, doing a 45m CNF dive. On second and third place were Christian Earnest and Christian Maldamé, both doing a 42m CNF dive and therefore going head to head in the Frozen Viking Static competition. Maldamé surfaced after 3’38 and Earnest won the duel with 4’02. 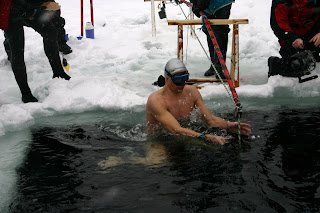 For a couple of the freedivers, the water got just a little too hot, and they chose to take off their wetsuit and go diving in only a pair of Speedos. The Oslo Ice Challenge proved that freediving does not have to be a sport restricted to warm, tropical waters, but can be carried out under real Nordic conditions.

Posted by Elisabeth Müller at 14:58 No comments: 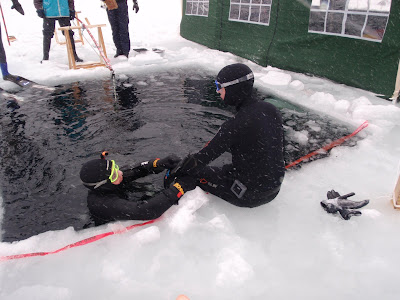 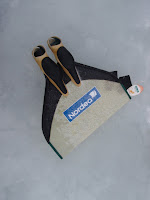 Despite some challenges out on the ice, the competition is running well. Alot of happy faces, cold feet, sensible dives and new experiences.

I completed a 35m CWT dive, which was a great feeling! It's something completely different than diving in warm water, but not as hard as one might think. I'm really looking forward to tomorrow and another try. Pluss we're doing a static... Yes, we are a little crazy. 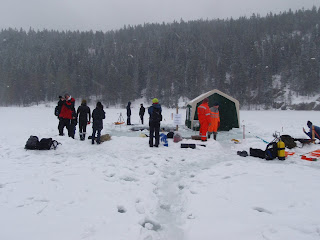 Posted by Elisabeth Müller at 01:07 2 comments: