Right after my last exam, I travelled together with Martin to Switzerland and to the beautiful city of Geneva for the first time. I was going to compete in the pool competition "Coupe des Dauphins" and Martin judge. We were really lucky to get to stay at the appartment of Christian Maldame, who's not only the team freediving world champion for 2008 (French team), but also a very nice guy! Jarmila Slovencikova from Czech Republic was also staying there, and the four of us had a great time, especially after the competition.

I had signed up for the competition maybe mostly for the trip itself, and also to

have an easy nice start of the competition year 2009. In DNF on saturday I did a very easy 83m dive. I was very happy to see that I can still do something, even without any training or the perfect shape (I had been sick only a week before). I must have overdone the lung strecthing this day though, because the next day I had pain and discomfort on the right side of the ribcage. I went into the water for the other diciplins, static and dynamic, but it didn't work at all to hold a full breath or having contractions. Well well, next time!

The competition saw some nice performances. Ilka Michaelis did a new national record for Germany with 99m. Both Jarmila and Christian made three good performances and won the overall ranking for the women and men respectivly. All the nice freediviers, the well-running organisation and the good pool made the competition a very pleasant one. I'd love to come back next year... 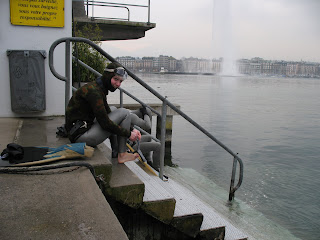 On monday after the competition, we had maybe the best time of the whole trip. Christian took us to a sauna/bath at the harbour of Geneva. Him and Jarmila got to do some freediving in the lake, cruising through and even under the big fountain! I stayed out because of the ribs, but will sure try this next time.

After spending several hours in the sauna, the turkish bath, the hammam and a dip in the lake (4-5 degrees!), we had a good lunch and headed back to catch the plain home. It was a really great experience and big thanks to our host, Christian!
Posted by Elisabeth Müller at 00:31