CNF in the cold waters of Hemmoor

Martin organized the 1st Hemmoor No-Fins Only last weekend, which involved exactly that: diving without fins. I did overcome some of my prior sceptism for this disiplin in Dahab, but I soon found out that it's a whole different game doing it in cold waters. With a 5mm suit and a mask, I had a really hard time getting anywhere! It didn't help that my body was feeling weak, my throat was sore and my ears sticky. 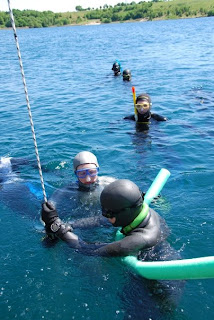 After both training days on Thursday and Friday had been pretty bad, I decided against competing on Saturday. We had lovely weather that day though, and I had a good time hanging out, coaching Anna and fun diving in the underwater forest. After all, it was my birthday(!). We finished off with a nice barbeque with fresh fish from the lake. 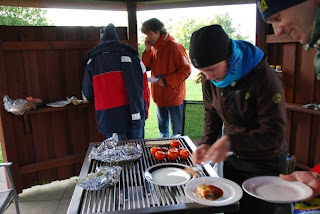 On Sunday, I was feeling much better and had announced 30m. After some lovely warm-up dives and some calming words from Anna, I went for my dive. All was fine untill 13m, where I took a little stronger arm pull and glided before equalizing my ears. But they were stuck! That was it for the competition in my case, but there were a lot of great performances by the other freedivers. Both PB's and national records were broken. Anna von Boetticher and Jonas Krahn both did new German records in lake with 35m and 53m respectively, and they won a turtle each. 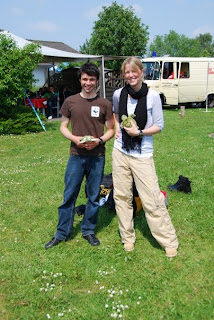 Posted by Elisabeth Müller at 22:58